The conference Walter Benjamin as Philosopher is devoted to the topic of Eli Friedlamder's book Walter Benjamin: A Philosophical Portrait. It is jointly organized by the University of Chicago's Department of Germanic Studies and the Center for Interdisciplinary Research on German Literature and Culture, the Department of Philosophy and the Committee on Social Thought.

The work of Walter Benjamin is arguably the most significant theoretical point of reference in the Humanities today. From his early speculations on drawing, painting, and color to his late work on Paris, from his readings of Hölderlin to his thoughts on translation, from his meditation on the German mourning play to his reflections on art in the age of its technical reproducibility, Benjamin developed remarkably original and compelling views. Because of Benjamin’s dense style and idiosyncratic use of concepts, however, it has been difficult for commentators to bring out clearly the philosophical basis of his thought. The recent publication of Eli Friedlander’s book Walter Benjamin. A Philosophical Portrait (Cambridge, MA: Harvard University Press, 2012; also published in German as Walter Benjamin: Ein philosophisches Porträt, tr. by Christa Krüger, München:  C. H. Beck, 2013) has significantly altered that situation, providing for the first time a synthetic account of Benjamin’s work that is at once alert to the nuances of Benjamin’s writing and conversant with the standards of philosophical argumentation. This conference will be the first on Eli Friedlander’s book.

The conference will have a workshop-format. Its central purpose is to create a forum for serious discussion on a topic important to humanistic inquiry today. The discussions will center around and draw their focus from a series of what in German are called Thesenpapiere: talks that formulate and briefly justify in a pointed fashion a set of major claims on the topic at hand. These papers will provide the instrument for partitioning the conference theme into a set of circumscribed topics. Of course, as we progress and our exchanges develop their own inner history, the topical scope of the discussions will dilate. Nonetheless, we hope to maintain a balance between focused investigation on specific texts by Benjamin and Friedlander’s interpretation of these and a larger view of Benjamin’s project. In addition to the colleagues who will deliver papers, we have invited several additional participants who have committed themselves to serious study of Friedlander’s book. This will guarantee a critical mass of informed audience members and provide us with a pool of competent moderators. 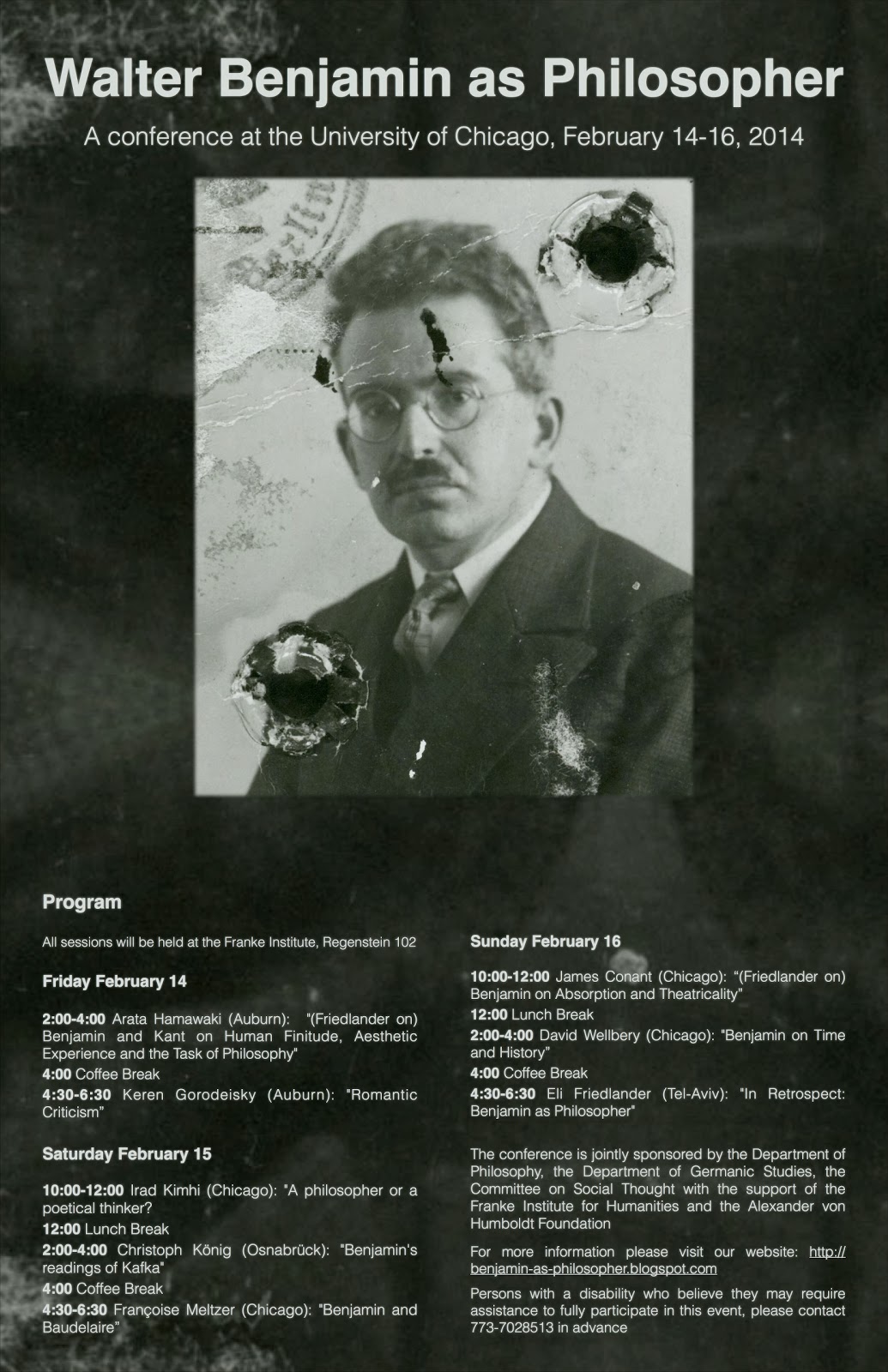